PUMA is the main sponsor of the Israeli Football Association (IFA), profiting from Israel's colonial subjugation of Palestinians and theft of Palestinian land and resources. PUMA also profits from the exploitation of Global South peoples in nations including Cambodia, where PUMA manufactures its products under dangerous and exploitative working conditions in order to cut production costs.

Exploiting workers in the global south

Whereas PUMA harms Palestinians by selling its finished products to Israel, PUMA harms Cambodians by manufacturing these products under ultra-exploitative working conditions in the company's Cambodian factories. Cambodian workers in PUMA factories (predominantly women) have repeatedly fainted as the result of the working conditions PUMA imposes upon them. As the Guardian reported in 2017, “The women who collapsed worked 10 hour days, six days a week and reported feeling exhausted and hungry. Excessive heat was also an issue in three factories, with temperatures of 37C [98.6 F]. Unlike in neighboring Vietnam, where factory temperatures must not exceed 32C, Cambodia sets no limit, though if temperatures reach a “very high level” causing difficulties for workers, employers must install fans or air conditioning.” The Guardian piece further notes, “On the outskirts of Phnom Penh, at a factory that makes sportswear for Puma, 150 workers passed out in March after thick smoke seeped across the factory floor.”

From the manufacture of its products under barbarous conditions (like those in its Cambodian factories), to the sale of its products to barbarous nation-states (like Israel), PUMA along with other corporations and state entities promote and benefit from a pipeline of racialized capitalism.

This pipeline of racialized capitalism doesn't just move products. It moves people. Workers forced to endure "10 hour days, six days a week" under conditions of unbearable heat while choking on smoke and fainting from hunger and exhaustion inevitably seek better options. And when there are no better options available where they live (conditions in Global South factories run by other corporations are no better), people migrate.

So it is with Cambodians: In the shadow of the violent and destructive US military intervention in Cambodia a half-century ago, Cambodians today face dire conditions and limited economic opportunities. Many Cambodians seek better lives through migration, including to Massachusetts. Today, large Cambodian populations live in the Massachusetts communities of Lowell MA (where 12.5% of residents are of Cambodian descent) and Lynn MA (where 4.2% of residents are of Cambodian descent), while the Boston metropolitan area hosts the second largest Cambodian diaspora population of any US city, and Massachusetts hosts the second largest Cambodian community of any US state. However, Cambodian migrants to Massachusetts and to the US broadly have been met with sweeping racist violence and repression from US Immigration and Customs Enforcement (ICE), repression which spiked in 2018 when the Trump administration began imposing visa sanctions “on Cambodia and a handful of other nations in order to compel them to speed up the [deportation] process.” Displaced from their homeland by US imperialism and the capitalist greed of companies like PUMA, Cambodians attempting to remake home and rebuild community in Massachusetts and the US face looming threats of further inability to live in place with safety and dignity.

So too it is with Palestinians: As PUMA gear flows onto the backs of Israeli soccer stars (and large profits flow back to PUMA), the Israeli state continues to work every day to expel and banish as many Palestinians as possible from their homes and land.

PUMA recently opened its new North American Corporate Headquarters in the Boston suburb of Somerville, MA. Speaking with the Boston Globe, PUMA's chief marketing officer Adam Petrick stated that the company's move to Somerville is part of an effort to deepen PUMA's presence and visibility in the Boston area. Since Fall of 2020, the Palestine solidarity group BDS Boston has led a local campaign against PUMA's presence in the city, holding monthly picket line protests in front of PUMA's Assembly square outlet store and corporate headquarters, along with other disruptive actions (see images below, and see here, here, here, here). 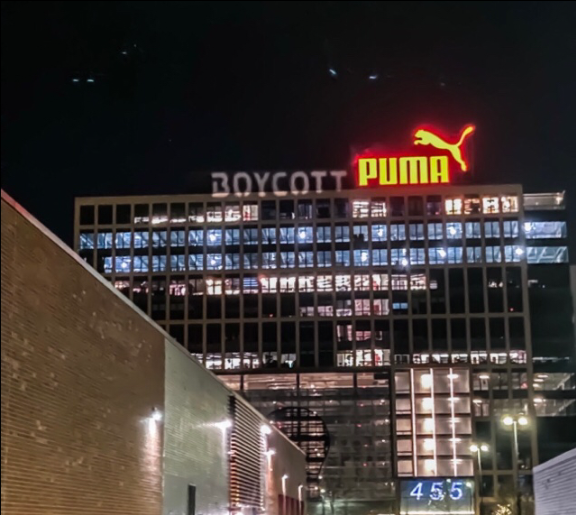 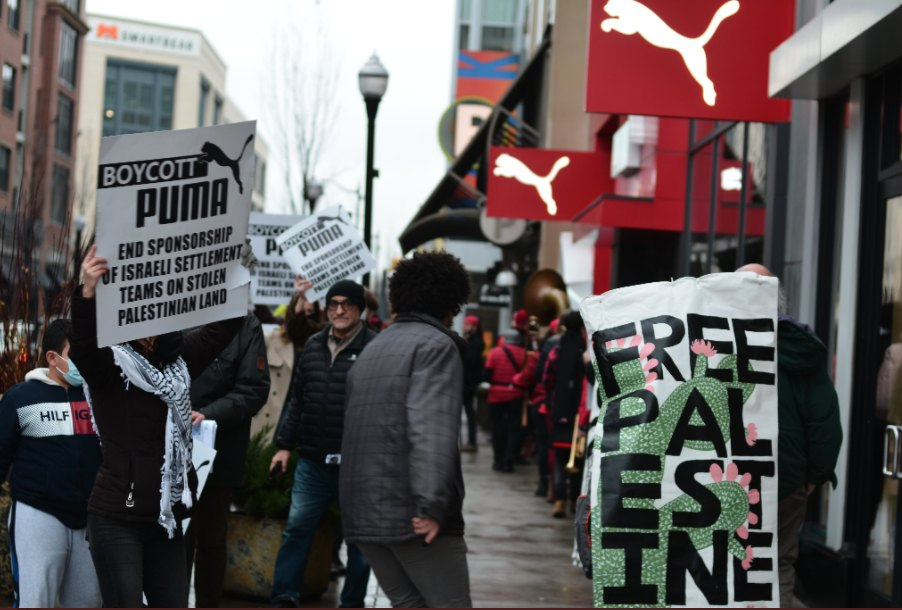 Since 2018, more than 200 Palestinian sports clubs along with Palestinian civil society have been demanding that sportswear and apparel company PUMA terminate its sponsorship of the Israeli Football Association (IFA), Israel's national soccer league, while calling upon people around the world to impose a boycott against PUMA to pressure the company to do so (see entry on PUMA for details). In 2018, PUMA launched an initiative entitled #REFORM, through which PUMA attempted to positively brand itself as supportive of racial justice and LGBTQ rights. As part of its #REFORM initiative, PUMA created partnerships with a number of American NGOs, including the ACLU. Over the past four years, numerous Palestinian and other Black, Brown, and/or Indigenous employees and interns within the ACLU have repeatedly urged the ACLU to terminate this partnership with PUMA, in order to respect the Palestinian call for an international boycott of the company until PUMA severs its ties with the IFA. The most responsive the ACLU has been to these internal calls for action has been to tell its employees and interns that the ACLU would "mention their concerns" to PUMA, with no commitment to action and no actions taken to date to sever the ACLU's relationship with the company.

Back to main page.